She was flamboyant, out-spoken and always told the truth.

Today, she is so unknown to many who have never had the joy of knowing of this most beautiful and unique woman. This past February 11, 2016 would have been Ms. Kennedy’s 100th birthday.

This is her story.

Florynce Kennedy (b. February 11, 1916 – d. December 21, 2000), attorney, activist. In her autobiography Color Me Flo, Florynce Rae Kennedy poked fun at herself for having “an acute case of word diarrhea.” Not one to hold her tongue, Ms. Kennedy built a public career out of this condition, becoming a celebrity activist known for her sardonic political humor and biting social commentary.

Born in Kansas City, Missouri, the second of Wiley and Zella Kennedy’s five daughters, “Flo” grew up in a two-parent household. Ms. Kennedy’s mother was a stay-at-home mom before the Depression, but not the typical maternal figure. Both she and her husband made their children’s lives uncommon. The Kennedy children were taught to value themselves and to give authority figures, black or white, only the respect they earned. The Kennedy girls were precious to, and protected by, a father who had no reservations about showing that he would back up what he said. On one occasion he confronted the Ku Klux Klan with his gun on the family’s front porch. The Kennedy girl’s school principal received similar treatment from their father as he gave the principal a lesson regarding the importance of their safety and sanctity. A former Pullman porter, Wiley Kennedy was a self-employed taxi driver who allowed the girls to drive his car, a rare source of social capital for teens from any working-class family in the 1930s. His indulgence and uncompromising protection characterized the Kennedy girls’ socialization, an uncommon childhood which may have set the tone for Florynce’s societal defiance.

After graduating at the top of her class from Lincoln High School in Kansas City, Ms. Kennedy’s adult life consisted of various jobs from owning a hat store to singinh on the radio. However, all of Ms. Kennedy’s stints of employment were a part of what she would later classify as “good times.” Ms. Kennedy’s “good times” had somber moments, as when ger mother had a mastectomy in 1938, and Ms. Kennedy herself faced serious illness, hospitalization, and a near-death experience. By 1942 Ms. Kennedy’s mother had died of cancer and Florynce and her two oldest sisters moved to New York City.

Ms. Kennedy held both public and civic assignments during the first few years of her residence in Harlem before pursuing a pre-law major at Columbia University Undergraduate. When she decided to apply to Columbia Law School, Ms. Kennedy was refused admission based on her gender, not her race. She nonetheless graduated with a law degree from Columbia in 1951, the dean having been warned that “more cynical” civil rights activists might not have been able to appreciate the differences between race and sex discrimination.

From the beginning of her career as an attorney, similar shrewd and tactical pressures marked M.s Kennedy’s practice of negligence law. As a trial lawyer, Ms. Kennedy mocked judicious behavior and safe alliances. She represented the civil rights leader H. Rap Brown as well as the estates of the recording artists Billie Holliday and Charlie Parker. She married a Welsh science fiction writer in 1957, but he died not long after. A White colleague embezzled from her and then disappeared. She found it difficult to meet the rent on her law office. Struggling, she began to wonder whether law was really her field.

In 1967, while upstaging the other radicals at a  Montreal antiwar convention, Ms. Kennedy serendipitously discovered an answer. She had called attention to herself by grabbing the microphone and protesting over Bobby Seale not being allowed to speak out about racism. Ms. Kennedy received an invitation to speak in Washington for a fee of $250 plus expenses.

During the 1970s, Ms. Kennedy’s satirical wit and quick tongue convinced her frequent lecture circuit partner, Gloria Steinem, that the latter must always speak first at their college campus engagements. Ms. Steinem confessed that she was definitely anticlimactic in the dreaded event that she had to follow Flo.

Ms. Kennedy’s willingness to be dismissed or criticized because of her outrageous dress (she wore pink sunglasses and a cowboy hat as a sartorial expression of her unconventional personality) and unapologetic vulgarity made her both an easy target and a popular lecture circuit speaker. Her fifty years of political activism benefitted poverty, feminist, and civil rights causes. Ms. Kennedy was also an advocate for prostitutes, ethnic minorities, and gay rights. Her convictions demonstrated an individual accountability and personal integrity. She lived a rebellious life shaped by doing what she described as “only as much as I was able to do in order to satisfy myself.”

She died at eighty-four years of age on a Thursday in her Manhattan apartment, December 21, 2000.

“I am for any movement that is off its ass.”

“You may not win the war…but you let them know that you are fighting a battle. I always say, if you spit on someone at a cocktail party you’re not trying to drown them; you just want to let them know you don’t like them.”

“Fashion, style, language are the stuff of which societal reins on the oppressed are made. Grow a beard, wear a dashiki, say ‘shit’ or ‘fuck’ at the wrong time or place and you can get on the open-season-for-niggerizing list.”

“My main message is that we have a pathologically, institutionally racist, sexist, classist society. And that niggerizing techniques that are used don’t only damage Black people, but they also damage women, gay people, ex-prison inmates, prostitutes, children, old people, handicapped people [and] Native Americans. And that if we can begin to analyze the pathology of oppression…we would learn a lot about how to deal with it.”

“If men could get pregnant, abortion would be a sacrament.”

“I don’t believe in marriage, horizontal romance or religion, church, and/or the Bible; I love the hiccups, words and fighting.”

“Being a mother is a noble status, right? So why does it change when you put ‘unwed’ or ‘welfare’ in front of it?” 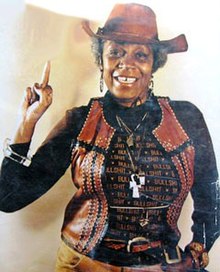 “Black Power may be the only hope America has.”

“I could understand feminism better because of the discrimination against Black people.”

“[Black women] want to see [White] feminists come in where women are involved in the Black community, whether it is about a feminist issue or not. See that’s what they can understand and see getting together with.”