America, the free and the brave.

No, just another example of a continuing long, very long line, of domestic terrorist.

Nikita Khrushchev said it wrong when he was said to have stated, “We will bury you.”

He should have stated, “You, will bury yourselves.” Although later, he is said to have stated, “Your own working class will bury you.” Whatever has been stated, America is tearing itself to pieces from within, has been for over four centuries, and this bloodlust and destruction is not something that has been done, nor is being done, by Black Americans. We are not the terrorists of this so-called nation. We never have been. Murdering savages like Stephen Paddock, Scott Ostrem, Devin Patrick Kelly——are just the oozing, pus-filled sores of racist domestic terrorism on which this nation is founded, running sores that are bursting open and flooding their savagery, spoken (and unspoken), from sea to shining sea.

They are not the first, nor will they be the last.

They never have been, nor never will be.

America, the Great Whore of Babylon is unraveling. The time has come. The Angel of Death is passing over America.

BABYLON IS FALLEN
[Babylon is fallen to rise no more.]

2. Hark, and hear her people crying,
“See the city disappear!
Trade and traffic all are dying!
Lo, we sink and perish here!”
Sailors who have bought her traffic,
Crying from her distant shore,
Refrain

3. All her merchants cry with wonder,
“What is this that’s come to pass?”
Murm’ring like the distant thunder
Crying out, Alas! Alas!
Swell the sound, ye kings and nobles!
Priests and people, rich and poor!
Refrain

4. Lo, the captives are returning!
Up to Zion see them fly!
While the smoke of Babel’s burning
Rolls across the darken’d sky!
Days of mourning now are ended,
Years of bondage now are o’er,
Refrain

5. Zion’s children raise your voices,
And the joyful news proclaim!
How the heavenly host rejoices!
Shout and echo back the same!
See the ancients of the city,
Terrify’d at the uproar!
Refrain

6. Tune your harps, ye heavenly choir!
Shout, ye foll’wers of the Lamb!
See the city all on fire!
Clap your hands and blow the flame!
Now’s the day of compensation
On the scarlet colour’d whore;
Refrain

From the Shaker hymn book, Millennial Praises, Containing a Collection of Gospel Hymns …Adapted to the Day of Christ’s Second Appearing, which was printed in Hancock, Massachusetts, in 1813. 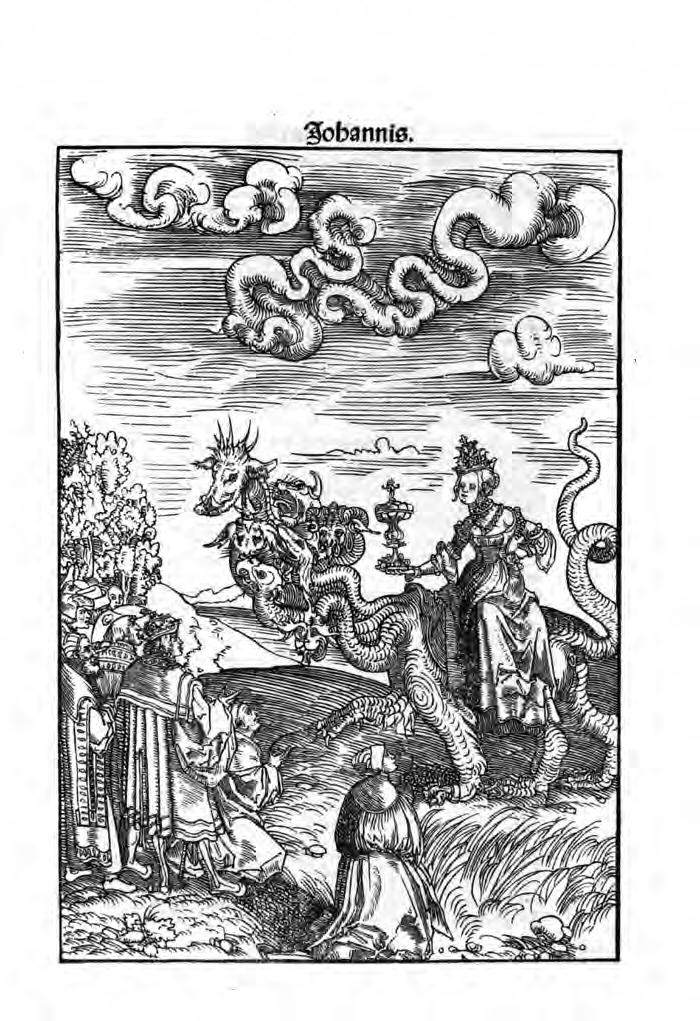 Whore of Babylon wearing the papal tiara from a woodcut in Luther Bible.

The Whore of Babylon by Lucas Cranach the Elder in the September, 1522 publication of Luther’s translation of the New Testament.

One response to “BABYLON IS FALLEN!”