16 And the ten horns which thou sawest upon the beast, these shall hate the whore, and shall make her desolate and naked, and shall eat her flesh, and burn her with fire.

8 Therefore shall her plagues come in one day, death, and mourning, and famine; and she shall be utterly burned with fire: for strong is the Lord God who judgeth her.

9 And the kings of the earth, who have committed fornication and lived deliciously with her, shall bewail her, and lament for her, when they shall see the smoke of her burning,

10 Standing afar off for the fear of her torment, saying, Alas, alas that great city Babylon, that mighty city! for in one hour is thy judgment come.

He murdered nine innocent people who never did him any harm.

He entered their church to destroy their lives and hopefully create a race war.

He is by all rights, a racist hater and a domestic terrorist.

He is Dylann Storm Roof.

It does not materialize out of nowhere. It is nurtured by parents, uncles, aunts, neighbors, friends—and a nation which seethes with rage when told of its atrocities against its Black citizens.

Now so many people are crying for the taking down of the Confederate flag.

I am in no way a fan of this most racist of symbols of the White Southerner, but, removing the flag will not in any way acknowledge nor admit what this nation has done to, and is still doing, to her Black citizens.

By all means, take the flag down, but accept the fact that denigration, degradation and defilement of Black Americans is at the heart and root of why people like Roof exist. Roof is no lone gun. He had help all along the way from the America which has for over 400 years sought the annihilation of all things Black. The America which created the divide of white purity and black inhumanity.

The America that created race-based slavery. The destruction of Reconstruction. The Ku Klux Klan, America’s first homegrown terrorist organization. The creation of and codification in de jure and de facto law 90 years of Jane Crow segregation.

The America that created, with the help of the federal government by way of the Federal Housing Administration, legalized racial restrictive covenants. The denial of the most basic of human rights; the denial of the vote; the subjugation of so many, many Black citizen’s lives that every day was a racial pogrom. The obliteration on a daily basis that America inflicted upon her Black citizens.

The wages of whiteness wrote this sad sorry chapter centuries ago.

The nine murders Roof committed are a long string in tens of thousands of murders done to Black citizens in the name of whiteness.

There shall be no end to blackness and whiteness in America.

On Fux News’s “Fox and Friends,” one host called the killings “a horrifying attack on faith.”

No. It was not an attack on faith. Have the balls to calls it what it is: venomous racial hatred of Black citizens. It is what it has always been:  an all-out racial war against Black citizens.

“You are raping our women and taking over the country.”

Rape is primarily white-on-white and black-on-black.

As for taking over the country, no where is such an insane statement backed up by fact.

As for White men suffering and losing ground in America, well to that I say let them trade places with Black American women. Then come and tell me just how bad you have it here in the good ‘ol USA.

The Council of Conservative Citizens, a racist group whose ideology Roof adheres to, has a federal non-profit tax-exempt status, which is the ultimate slap in the face of all taxpaying U.S. citizens. Which, in effect, makes all U.S. citizens funders of hate.

America’s war against her Black citizens has been enslavement. Segregation. Malnutrition. Starvation. Mass rape. Burned, raped and tortured before and during lynching spectacles. Inadequate and non-sufficient education. Denigrating racist stereotypes. Racist housing policies. Laws to circumvent and strangle the existence of Black lives.

People like Roof know exactly what they are doing and no amount of their planned  insanity pleas will convince me otherwise.

Likewise, I feel no pity for a nation such as the United States of America.

Forget the Osama bin Ladins of the world. Forget Al Qaeda. Forget ISIS. They do not hold a candle to the slaughterfest that has been committed against Black citizens throughout this nation’s history.

Until the Great Whore of Babylon deals with all the viciousness she has done to her Black citizens, viciousness of the past and present, she will continue to go down in the muck and mire as the monster that she is. 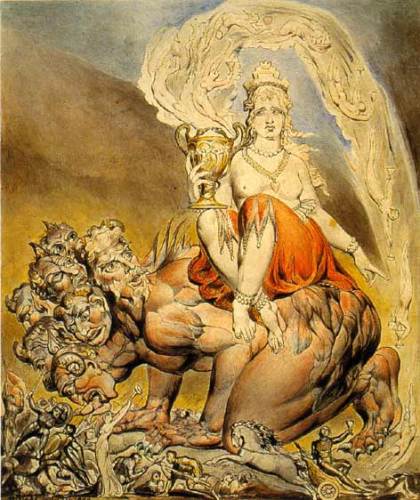