I originally reported on the desecration of the grave of little Willie Sims, a child who was buried in the Humble Negro Cemetery in the state of Texas. The post can be found  here.

Willie’s remains were torn up out of his resting place, and the three monsters who disturbed his grave used Willie’s skull as a bong to smoke marijuana. 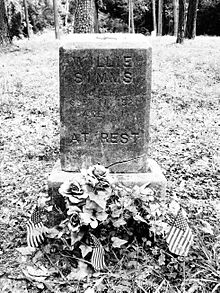 This pattern of desecrating the graves and cemeteries of Black Americans is nothing new; if anything, it is an ongoing aspect of racist white supremacy that is the ultimate form of cruelty.

Edward and Kenneth Taylor sued the Baker’s Forge Cemetery, Coolidge Baptist Church, Cedar Hill Baptist Church, Demory Baptist Church, and eight trustees and operators of the cemetery, in Campbell County Chancery Court.
The Taylors claim they were instructed to disinter bodies – which is a felony in Tennessee – but refused, and were fired for it.
“For example, plaintiffs were directed to desecrate and disinter the grave of Jennie Irwin Baker, Grave no. 240-145, in order to bury Alvis Buck Cantrell next to his wife, who had previously been buried in Grave No. 240-144 on top of Geo. W. Baker, according to the permanent records of the cemetery,” the complaint states.
“In addition, the permanent records of the cemetery contain two pages designated as the ‘colored section (Negro).’
“[Defendant] Bob Housley would refer to the corpses buried in the ‘colored section (Negro)’ as ‘niggers.’
“Bob Housley joked that all plaintiffs would find when he disinterred those graves was ‘black dirt.'” (Parentheses, but not brackets, in complaint.)
The Taylors claim that Housley’s plan to dig up the bodies in the “Negro” section of the cemetery was part of “an unlawful scheme and plan to resell to white persons the gravesites designated in the permanent records of the cemetery as the ‘colored section (Negro).'”
“Plaintiffs had been directed and refused to sell these occupied gravesites,” the Taylors say in the complaint.

The gravediggers refused to be a part of this perversity and were fired for their insubordination. They had at the time filed a $250,000 lawsuit for wrongeful termination.

Another grave desecration occurred in the same year when the graves of Black decedents, approximately 3,000 Black women, men, and children from the 1800s in the historic Bethel Burying Ground cemetery were desecrated under the city’s Weccacoe Playground and a trash dump at Queen and Lawrence (near Fourth and Catherine) in Philadelphia, as stated in the following article:

I next wrote about it, this time in The Philadelphia Tribune one year ago, additional scholarly research had increased that number to 5,000. And, as recently as just a few days ago, updated scholarly research expanded that number to approximately 8,000 or more! And, still there is no municipal memorial, marker, or signage. In other words, there’s nothing but nearly 150 years of racist defilement.

The Sixth and Lombard site of Mother Bethel African Methodist Episcopal Church was bought by Bishop Richard Allen and other trustees in 1791 after which they began services there three years later.

In 1810, they purchased land at Queen and Lawrence and used it until 1864 as a private cemetery, known as Bethel Burying Ground. They were compelled to do so because Philadelphia’s public cemeteries would not accept Blacks.

Things went well until the trustees encountered some financial difficulties and had to take bold steps to avoid church foreclosure.

Accordingly, in 1869, they allowed unused portions of the cemetery grounds to be rented in a 10-year lease for wagon storage to Barnabas Bartol, a white man who operated a sugar refinery. There was explicit language in the lease mandating that those “who are interred … are to be allowed to remain there undisturbed.”

Despite that, as reported by a local newspaper in 1872, the refinery (along with other white businesses) repeatedly “dumps rubbish … over the graves.” This caused the cemetery to deteriorate to such an extent that it could no longer operate as intended.

Accordingly, it was sold in 1889 to the white city government that ignored it for a few more years before transforming it into a city garden in 1901 and attaching a city playground around seven years later. The Department of Recreation took official responsibility of the park in 1910.

But, this last incident was the most sickening and hateful.

In 1912, when innocent Black women, men and children were attacked, raped, burned, murdered and driven from their homes in Forsyth County, Georgia, many of them lost their land and property.

Decades later, over 75 years from the racial pogrom, a resident who had moved to Forsyth County, GA, was walking up the steps to visit someone, and as she was walking on the steps she saw what looked like inscriptions in the paving stones. Kneeling down and looking more closely, she saw that these instead were the headstones that had been torn away from the graves of those many loved ones whose descendants had to flee with their lives with nothing but the clothes on their backs. That some racist hater used these headstones to line a walkway is the height of savagery and venom.

This history of disinterring the remains of Black people is part of a long line of abominations. Many too numerous to count. The destruction of the resting places of so many Black people is truly a sign of depravity where even in the grave there is no sanctuary.

One response to “DESECRATION OF BLACK AMERICAN GRAVESITES: BUSINESS AS USUAL FOR RACIST WHITE SUPREMACISTS”