This November 22, 2013 marks the 50TH Anniversary of the assassination of President John Fitzgerald Kennedy.

I leave you with images of a JFK many people are not familiar with.

I leave you with images of his appearances and his own words on such issues as civil rights, nuclear test ban treaties, and the nation and the world at large. 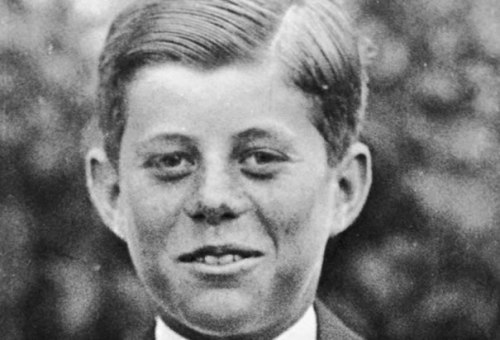 Kennedy as a Youth: In 1935, Kennedy enrolled at Harvard University and received a degree in international affairs with honors in 1940. (Photo Credit: Getty Images) 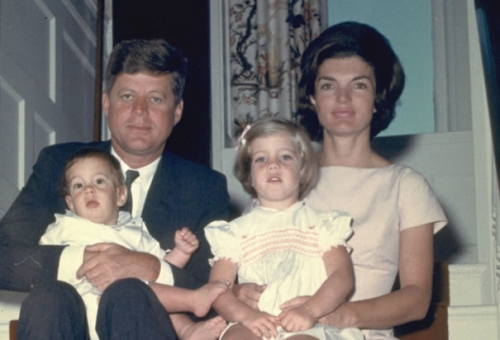 The Kennedy Family: Kennedy was born into a large, wealthy family in Massachusetts. (Photo Credit: Bettmann/CORBIS)

The American University speech, titled A Strategy of Peace:

President Kennedy delivers the commencement address at American University, June 10, 1963. He called for negotiations “toward early agreement on a comprehensive test ban treaty” resulting in the Nuclear Test-Ban Treaty. He announced his decision to unilaterally suspend all U.S. atmospheric testing of nuclear weapons as long as all other nations committed to do the same in “good faith and solemn convictions”. The speech was unusual in its peaceful outreach to the Soviet Union at the height of the Cold War, and is remembered as one of Kennedy’s most outstanding and important speeches. 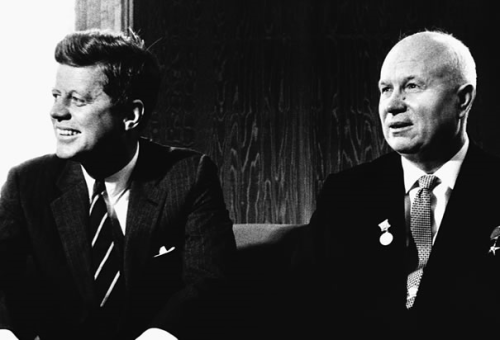 Kennedy with Khrushchev: The “Cuban Missile Crisis” was a showdown between JFK and Soviet leader Nikita Khrushchev that brought the two nuclear superpowers to the brink of war. (Photo Credit: Bettmann/CORBIS)

JFK’S speech on the Cuban missile crisis where he took on Khrushchev and Russia: 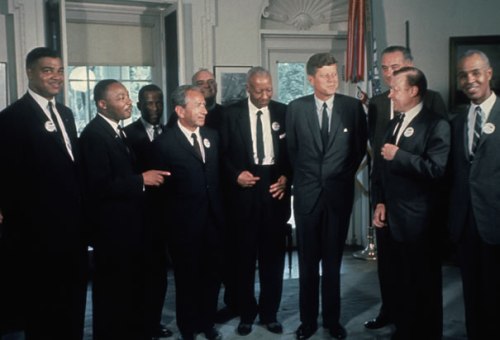 Kennedy with Civil Rights leaders: Kennedy supported Civil Rights though it wasn’t until after his death that major legislation passed. (Photo Credit: Bettmann/CORBIS)

“I hope that every American, regardless of where he lives, will stop and examine his conscience about this and other related incidents. This Nation was founded by men of many nations and backgrounds. It was founded on the principle that all men are created equal, and that the rights of every man are diminished when the rights of one man are threatened.”

“We choose to go to the Moon in this decade and do the other things, not because they are easy, but because they are hard; because that goal will serve to organize and measure the best of our energies and skills; because that challenge is one that we are willing to accept, one we are unwilling to postpone, and one which we intend to win …
It is for these reasons that I regard the decision last year to shift our efforts in space from low to high gear as among the most important decisions that will be made during my incumbency in the office of the Presidency.” – JFK, 1962

John F. Kennedy: Kennedy was a popular president. Today he is still popular with historians and the public. (Photo Credit: Bettmann/CORBIS) 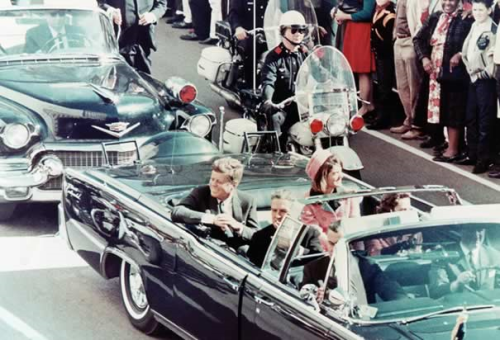 The Assassination of John F. Kennedy: Kennedy was assassinated while driving through Dallas in a convertible. (Photo Credit: Bettmann/CORBIS)

Caisson with flag-draped casket: Kennedy is buried in Arlington National Cemetery, where an eternal flame burns in his memory. (Photo Credit: Bettmann/CORBIS) 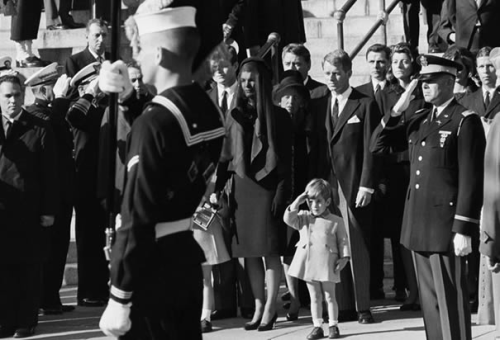 There was much that President Kennedy could have done in his administration, much that he failed in doing because of the tentative steps he took to take on racism and poverty in his own country as well as imperialism in which America butted into other nations around the world, especially in the case of Vietnam and Korea. There were issues President Kennedy started out on but never got a chance to complete, issues that were taken up by President Lyndon Baines Johnson, and those were civil rights and voting rights.

But those who took his life that fateful day on November 22, 1963 also failed.

No matter what they sought to stop by assassinating President Kennedy, it did not stop the inevitable.

Time marched on; it always does.

Evil, hateful, murderous cruelty and wanton worship of greed and “I’ve got mine, you will never get yours”never wins always.