THE MAMMY STATUE, THE GOOD DARKY, AND OTHER TESTAMENTS OF THE INSULTS TO BLACK HUMANITY

I first spoke of the Mammy Statue in my “Towards The End Of Aunt Jemima” post back in 2007. Here is an excerpt on the Mammy statue that Southern White women proposed to have erected to honor, as they put it, all the Black women who had toiled under slavery, and into Jane Crow segregation, for former White masters:

“In the 1923s, the Daughters of the Confederacy asked the Congress to set aside a site in the Capitol area where a monument in recognition of the “Black Mammy” could be built. Black women across the nation were enraged at the proposal for a Mammy statue. Civil rights leader Mary Church Terrell wrote that if it were built, ‘there are thousands of colored men and women who will fervently pray that on some stormy night the lightning will strike it and the heavenly elements will send it crashing to the ground.”  Black people were so angered and offended at the thought of such an outrage even being suggested that they protested vociferously against this monument of insulting degradation against the image of black womanhood, and as a contemptuous sign of black servitude. They instead suggested that “a better memorial would be to extend the full rights of American citizenship to the descendants of these Mammies”. Ending the lynching, public humiliation of black people on trolley cars and other forms of transportation, giving black people the right to vote, were what black people needed, not more racist/sexist slaps in the face. So great was the pressure brought by black people, black leaders and black groups, that the monument was rightfully killed in the House of Representatives.”

Many Black people at that time were enraged that such an idea would be proposed. The very thought of putting up a statue of a “mammy” was the height of callous disregard, insulting, and a desire not to acknowledge the humanity of Black women. As a result, the mammy statue was scrapped, and never came to be.

That many Whites sought to cling to the image of Mammy, an image that was created to assault the humanity, sexuality, and womanhood, of ex-enslaved Black women comes as no surprise.

Mammy’s Cupboard, 1940. This place is still in existence:

The mammy stautue movement fell through, and rightfully so.

But, the most well-known of all mammy products still exists, even if she has been cleaned up for a more contemporary consumer public, she is still a racist image. But, across America, there still stand statues which are ignominous and cruel insults to the humanity of Black people who survived American race-based slavery, the destruction of Reconstruction, and the 100-year reign of terror known as Jane Crow segregation. One such statue that still stands is the “Good Darky”, as referenced by Abagond in his post, “Uncle Jack, the Good Darky“.

The statue still stands. As I was reading Abagond’s post, the first thought I had was to have the descendant of the statue’s creator donate the statue to the Smithsonian, intact, with no change to its original inscription. This statue, even though egregious, is a testament to the disregard so many Whites had against the humanity of Black people (and still do). It shows how venomous racist America was, and still is, against her Black citizens. Better to have it brought forth before the eyes of all U.S. citizens to see that here———–here—–is evidence of how lowly so many non-Blacks thought of Black Americans (and still do). But, the removal of the original inscription on the statue is a sordid desire to erase the true history of what Black people endured under slavery and segregation. The removal of the inscription is a rancid attempt to revise history—-to eradicate and annihilate the truth————–to destroy the fact that statues and so-called monuments such as these are true testimony to the freakish carnival house mentality that non-Blacks viewed Black Americans with.

It is the myth of the ever faithful, good, compliant, “Yassuh,” Mammy, Darky, Sambo, Rastus, Coon that so many non-Blacks continue to believe in and grasp to as if a pile of cocaine. It is the numbing, brain-rotting belief in the myth that Black Americans could never have possibly been like all other human beings who live in this world.

Assaults that still stand the tests of time in the form of stereotypes———-and monuments.

But, Uncle Jack’s “Darky” statue is not the only example of contempt that millions of Black Americans had to contend with (and still do).

The statue honoring the White Southerners who took part in the Colfax Massacre, still stands as fact as one of this country’s most venal coup d-etats that occurred, and many people are ignorant of that important part of history.

The fact that a school was named after the founder of the Ku Klux Klan, and is still named after that person, even when the Black parents protested to the school board to have the name changed.

The fact that the infamous Black lawn jockeys still exist on many people’s lawns throughout America. 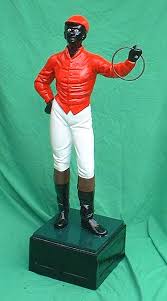 The facts that forms of racist memorabilia, helps one to realize the psychotic hate and cognitive dissonance the creators of these objects had in their pysche to fashion such objects of vile hatred.

Mammy/Aunt Jemima, Rastus, Uncle Ben. The desire to kill and consume that which is hated and discriminated against. The desire to engulf and cannibalize the Other.b Some of these products still are sold and bought outside of America.

Originally sold in China until 1985 with the racist image to the left, it was revamped when Colgate bought the company in 1984. Colgate changed the name to “Darlie”, remade the image into a half White/Black Man face, and continues to sell the toothpaste overseas. Even though Colgate changed the name to “Darlie”, in China, the Cantonese toothpaste product “Haak Yahn Nga Gou” name  (Traditional Chinese: 黑人 hēirén, or “black man”) literally translates into “Black Man Toothpaste.” The toothpaste is also still sold in Malaysia. countries in Southeast Asia, Hong Kong, as well as China.

These and many facts stand as proof that slavery was never the benign institution so many people then—-and now—wish to make it as. These statues are proof that the destruction of Reconstruction was stomped into the ground before it could even begin.

These statues, monuments, schools, streets, highways and physical remnants are evidence of how hateful and visceral America has been to her Black citizens. They obscure and hide the true realities of how horrorific life was for Black people living under slavery and segregation.

Many times, these stereotypes overlap in a ying-yang, back-and-forth scenario with both White men and White women.

These objects were all created to defile, to debase, to crush and to obliterate the humanity of Black Americans, created during a time when the value of Black life was neglible, and none-existent.

Such objects/icons disparage and disrespect the full humanity of Black Americans.

But, such objects still stand as testament to the evil, vicious, brutal and cruel hate that Black Americans have prevailed against.

And still fight against.

“CLINGING TO MAMMY: THE FAITHFUL SLAVE IN TWENTIETH-CENTURY AMERICA“

“The Colfax Massacre: The Untold Story of Black Power, White Terror, & the Death of Reconstruction,” by Leeanna Keith.

“Mammy: A Century of Race, Gender, and Southern Memory,” by Kimberly Wallace-Sanders “

“The Day Freedom Died: The Colfax Massacre, the Supreme Court, and the Betrayal of Reconstruction,” by Charles Lane.

5 responses to “THE MAMMY STATUE, THE GOOD DARKY, AND OTHER TESTAMENTS OF THE INSULTS TO BLACK HUMANITY”